Now is the time for peanut growers to begin foliar disease control programs. The first fungicide spray should go on when peanuts reach R3, or when about half the plants in a particular planting have at least one pod starting to develop, as illustrated below. Most fields in North Carolina will have reached this stage by now. In most cases, a group M (multisite) fungicide such as Bravo (chlorothalonil) or Tilt Bravo (groups 3 and M) should be used for the first spray. 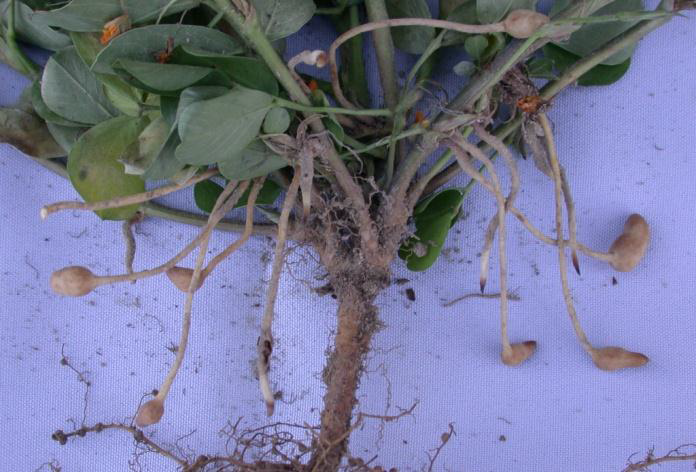 Early Sclerotinia infections are often found away from the crown. The fluffy white fungus is easiest to see early in the morning or after a rain. You must look inside the canopy to spot these infections. Infected stems develop a bleached appearance as the disease progresses. 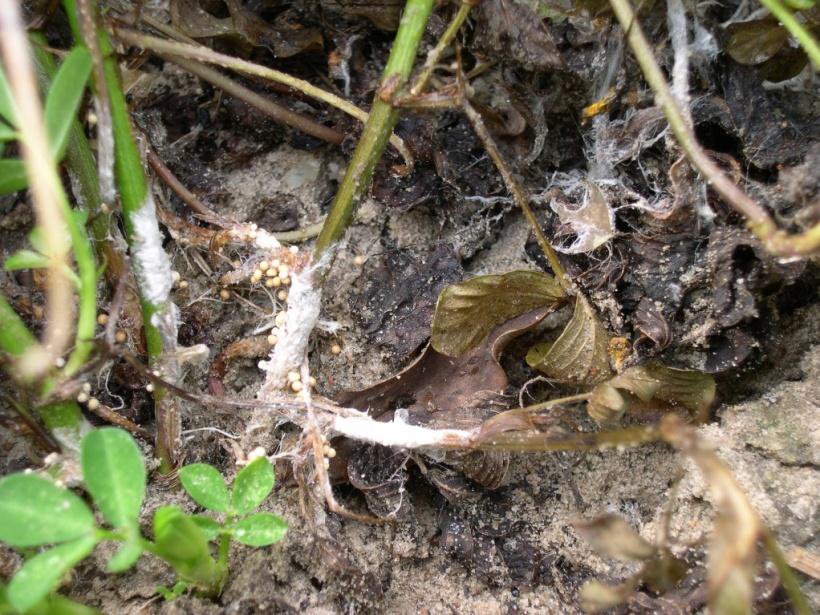 Southern stem rot can sometimes be confused with Sclerotinia blight. Southern stem rot usually starts at the crown of the plant or on stems touching the ground near the crown. Infected stems are the color of a brown paper bag. The white fungus growth is thick, stringy, or fan-shaped. Later, fungus structures about the size and color of mustard seed will develop. 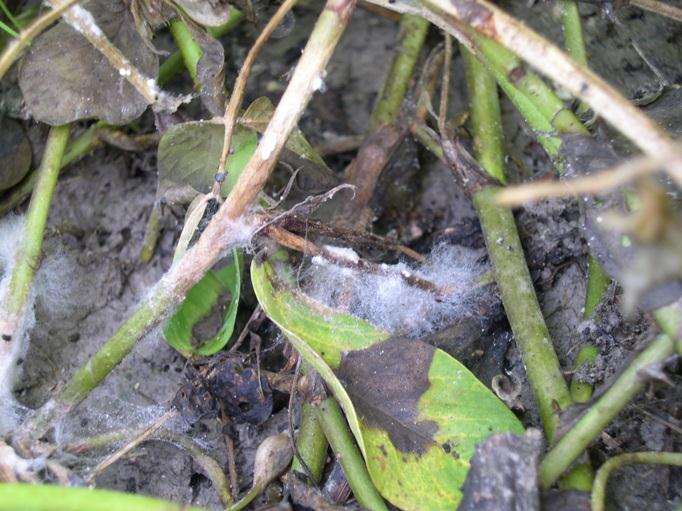 High temperatures and the recent rains could make this an active year for southern stem rot. Most fields should receive a fungicide for stem rot control at the second spray, or approximately two weeks from now. Fields at high risk for stem rot problems those planted to a highly susceptible cultivar like Gregory, irrigated fields, fields or cultivars where heavy vine growth can be expected, and fields that have a history of stem rot and/or vegetable production may benefit from an earlier soil fungicide application. Foliar fungicides effective against stem rot include Abound (group 11) and Provost (group 3). Artisan (groups 3 and 7), Convoy (group 7) and tebuconazole (group 3) are also effective but must be mixed with a foliar fungicide such as chlorothalonil or Headline (group 11). Growers who chose to start the season with a soil fungicide will need to adjust spray schedules or mix with a group M fungicide to avoid potential resistance problems. Remember that group 11 fungicides can only be applied twice in a 5-spray program. See the Agricultural Chemicals Manual for rates and other details. http://ipm.ncsu.edu/agchem/agchem.html

The new cultivar Bailey has moderate leaf spot resistance and good resistance to southern stem rot. The first spray can be delayed two weeks (R3+2 ) on Bailey. The new cultivar Sugg also has resistance to these diseases. Fungicide programs have not been tested as extensively as on Bailey, but I believe that sprays can also be delayed on Sugg. Growers who chose to delay sprays on Sugg should be sure to scout carefully until we have more experience with this cultivar.

Leaf spot and Sclerotinia advisories are available daily during the summer. Email Barbara Shew or your county agent if you would like to receive advisory emails. Advisories are also available on-line at http://ncsupeanut.blogspot.com/