Find this article at:
go.ncsu.edu/readext?322968
— Written By David Jordan

Most people will probably get enough rain with this storm to push the crop along. One question that has come up is how long from flowering or initial peg does it take to make a harvestable pod. The estimate I use is 8 weeks from flower to a harvestable pod (that will not dry up and blow out of the combine.) So, after this rain it could be that some folks in dry areas will set a very late crop. If we have warm fall and enough moisture that crop might be harvestable by the middle to latter part of October. While peanut maturity is most often driven by temperature and moisture (heat units and water,) there is some percentage of maturity that is influenced by photoperiod. This is probably a small percentage but this could contribute to pods getting mature more quickly (although they would be smaller) than the 8 weeks. Also, we don’t know a great deal about cooling of temperatures and physiological process that influence maturity. Is there some threshold temperature that influences pod maturity above the temperature that shuts things down but below “normal” or warm temperatures that help acquire valuable heat units. We don’t know how much photoperiod and cooling trends influence plant responses that “tell the plant we need to get these pods mature.” But, sometimes it is amazing how quickly they mature in fall when the heat units don’t seem to match up.

Some folks have been asking if they should spend any more money on peanuts (those that look bad right now.) My answer is that farmers have invested so much already I would spray fungicides a few more times and give the crop all the chances possible to mature and yield. So, this expense would be on the order of $5 to $20 more per acre for most people. Then, based on how he crop looks in October the farmer can decide whether or not to dig and combine. But, if the vines are not protected for the next 4 to 6 weeks or longer there is even less of a chance to make a crop. Peanuts are amazing in that they will surprise us in big ways, and in recent memory the surprises have been positive. Along those same lines, we have been shocked at corn yields in some of the dry areas of the state. In general, all of our crops are yielded better under a wider range of conditions…if the yield potential is higher with newer varieties then it stands to reason that yields will be higher than they used to be even under poorer or later conditions. So, at this point encourage people not to give up…just wait and see and then make a decision on digging and combining, but protect vines so the peanuts have a fighting chance through October.

Mitch Smith has done some pod blasting with CHAMPS and Bailey under irrigation that was planted in early May (5th to 10th.) My recommendation is that these are about 3 weeks away as they look now, but the best thing to do is look at them in 10 days or 2 weeks and make sure they do not slip up and get ready more quickly. I would not want those Baileys to get away by digging too late. This is why we always recommend that people pod blast a field at least twice (for example, if these fields get 8 inches of rain the maturity may stop progressing…too much water can be as detrimental as not enough.) Keep in mind a week can make a lot of difference and fine tuning things by 4 or 5 days can really help. Only way to do this is look at progression over time. Also, we always worry about the black pods shedding, and by looking at pods more frequently we can get a handle on when they moved into the black category. We only want about 30% in the black category when we dig (we want more but it just doesn’t work that way.) If we have a lot more than 30% in black category we are going to lose some of them in the digging process…combined brown and black should be about 65% of total pods, and these are ready to dig right now and not 5 days from now. Hope this ramble helps. Also, for those that are just beginning to use this procedure, make sure you keep the peanuts moist prior to and following blasting. They all look about the same if they dry out before you blast or if you let them set around following blasting prior to laying them on the chart.

Also, Dewayne and I can help with some of your pod maturity clinics, but we do have research in the field and part of that is pod blasting, so check with with us as soon as you can if you want some help. Also, Al Cochran has a maturity clinic in conjunction with the PVQE tour on September 13 near Hamilton. You are welcome to attend that event. Dewayne and I will also have some peanuts blasted for the field day on September 8. 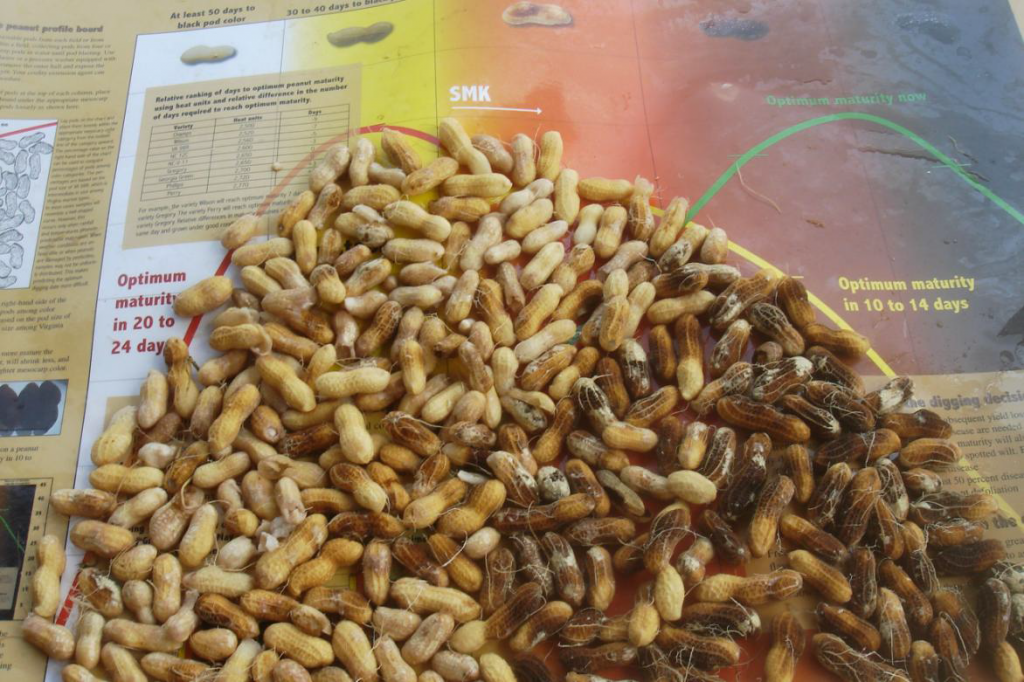 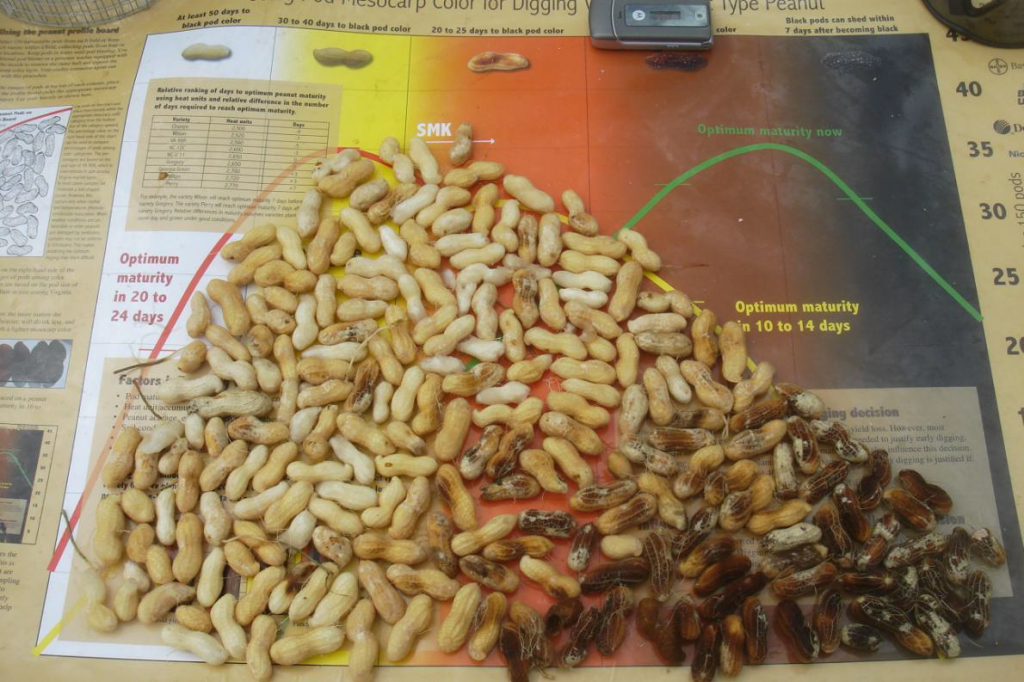