Find this article at:
go.ncsu.edu/readext?396900
— Written By David Jordan

As we move into late August and September we will be concerned about keeping vines healthy from disease and preparing for digging and harvesting. As of the time of this article was prepared, heat unit accumulations were about normal or are at least not experiencing extremes compared with previous years. Rainfall has been sporadic. Some growers have experienced drought and concerns over crop development and yield and the array on pests that come along with drought. Others have had too much rain and have had to deal with flooded soils, loss of some nutrients and problems with yellow peanuts. By the time this article comes out most of these issues will be taken care of, either by changes in weather patterns of use of practices that minimize stress on the crop. One question we may have is how these conditions will impact yield and quality and how growers will need to plan for digging and harvesting. Until about the second week of September much of this is guess work but we can start getting a fair idea of crop development by late August and early September. For most varieties around 2400 heat units is the earliest we would begin digging. With delays in crop development by too much or too little water, that number often needs to be increased. Currently, there is no better way of determining when to dig than by making an initial assessment of fields the week after Labor Day, and then plan to make 1 or 2 more assessments of each field so that digging can be fine-tuned. I know many growers are larger now than ever before and having time to check fields multiple times is challenging if not impossible. Regardless of this management decision associated with detail, peanuts can lose anywhere from 300 to 700 pounds per acre on the front end by digging too early. Waiting one more week until optimum maturity can, for example, make you $85 per acre ($425 per ton at 400 pounds per acre). That can pay for the combination of your herbicide and insecticide bill or your fungicide bill. There are risks to waiting but delaying digging until optimum maturity makes money.

Over the past few years we have looked closely at Bailey and its response to digging date. In 2012 and 2013 this variety kept on picking up yield even as digging was delayed. This was surprising initially, but when one thinks of the health of Bailey’s vines due to resistance to disease and the relative small size of Bailey’s seed, it stands to reason that this peanut can remain on the vines quite well even after the optimum date as predicted using the profile boards we often use. In 2015 we had the normal yield response to Bailey with increasing yield as digging was delayed and then a typical decrease as we moved into October. This reminds us that peanuts can only stay on so long, and we don’t need to assume that yields will keep on increasing well into October every year. In 2015 the maturity profile was very tight. Certainly not reflecting a

determinant peanut (if one exists I don’t know where it is) but in most cases there was not a double crop and in many fields a high percentage of pods were mature at the same time. The beauty of this is that if you can dig on time yield and grades will be up. The worry is that if there is a delay, a significant amount of peanuts can shed. Last year most people were able to dig a very mature crop on time, and that paid off for a lot of people.

I’ve heard some discussions about thin shells and concerns over breakage once they are out of the field. I don’t know that this is unique for our varieties or if it just reflects a high yields and meat content from the 2015 crop. Something has to give when we have high grades and meat, and that most likely is shell thickness. With that said, handling them as gently as possible will help on this and for the farmer will lower LSKs.

As you move into harvest, you might think that relatively wide differences in planting dates will have a major difference in when you can harvest. This does not pan out very often, at least in our typical range of planting dates. A three-week difference in planting date will mean a week or so difference in digging date. If you have a lot of acres you will need to keep this in mind. And with Bailey on so many acres and a pretty good May for planting on time (most peanut were planted by May 25 or sooner,) there will be a lot to take care of at one time. And, as we look to the future, there does not appear to be a big difference in yield response for Wynne, Sullivan, Sugg and Bailey when comparing digging dates.

There will certainly be a tendency to say “I have to get started sometime to get them all in.” That is indeed true. Just keep in mind that if you increase you digging capacity you can be timelier. Assuming you can gain $85 per acre by delaying digging until optimum maturity, some of that money can go to the expense of an extra person and digger. And, that extra person and digger can help on the back end if digging takes place after optimum maturity when we can get some losses due to pod shed. Keep in mind that peanut prices are on the low side right now, so increasing your timeliness can help get everything out of crop with little added expense.

To finish up I have provided some information directly out of our production guide as it relates to digging and harvest. I hope this helps. There are also a few images and graphs that support comments in this article.

And, try to put September 10 at Lewiston and September 15 at Whiteville on your list for field days. Hope to see you there!

Although market grade characteristics often remain high when peanuts are dug later in the fall, yield is often lower due to pod shed. A balance between digging too soon and digging before frost or inclement weather needs to be reached to maximize yield and quality. At harvest, growers should follow the weather forecast closely and not dig peanuts when freezing temperatures are expected. It is also important to have adequate harvesting and curing equipment so that the peanut crop can be handled within a reasonable period of time. At least three days, and in many cases more than three days, are needed between the time of digging and frost to allow sufficient drying to prevent freeze damage. Digging and harvest capacity for growers are important to consider.

The speed at which growers can plant peanuts is not the same as the time and labor it takes to dig, combine, dry, and haul peanuts. Most crops require a one-step process to harvest, while peanuts require two stages. Soil conditions during digging must be ideal to effectively remove peanuts from the soil and invert vines. Growers need to realistically determine the amount of time these operations will require. With respect to digging, it is estimated that with four-row equipment and six-row equipment, 30 and 40 acres can be dug per day if growers dig for 10 hours a day driving at 3 mph with no interruptions. A six-row self-propelled combine can harvest 20 acres in a day driving at 1.5 mph, while four- and six-row pull-type combines can harvest 15 to 20 acres in a day, respectively. Weather conditions can have a tremendous impact on the number of hours peanut can be dug and combined in a given day, and the estimates provided here relative to time represent a best-case scenario. 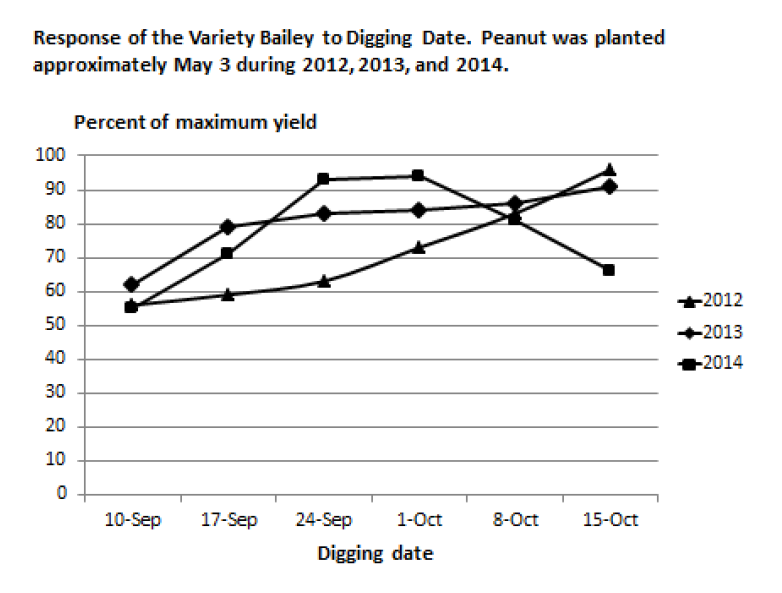 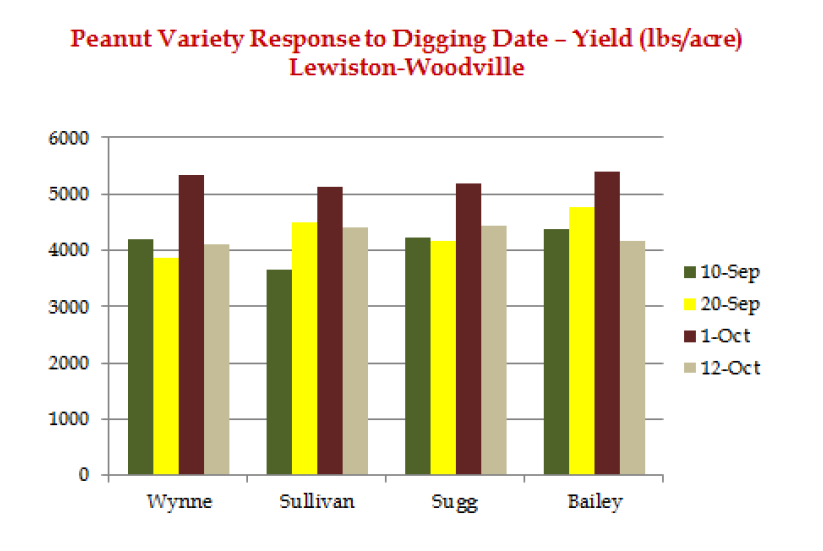 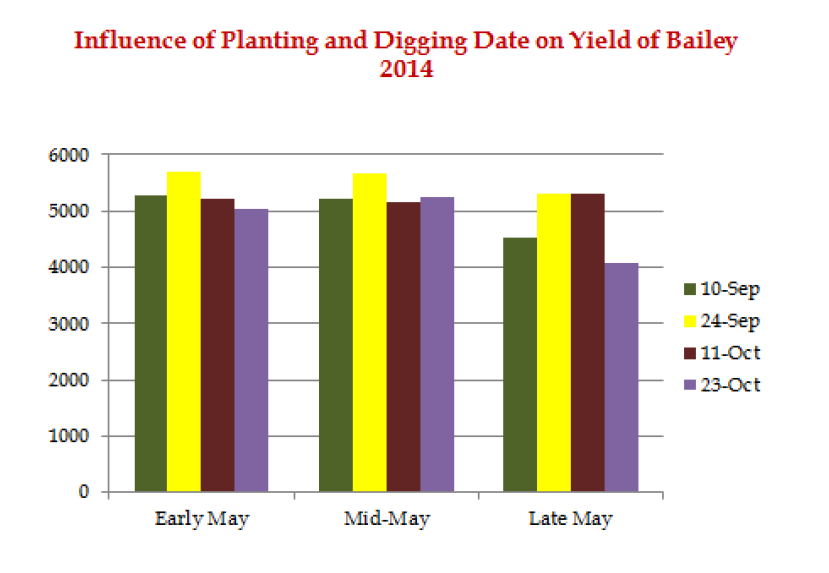 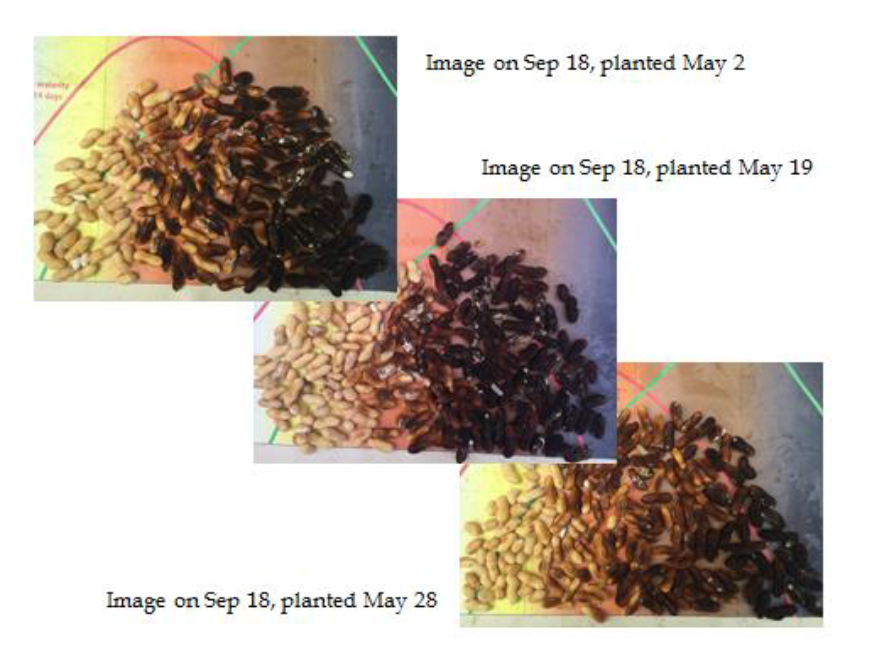