What happened to this spot of peanuts? Looks like Zn toxicity but… It didn’t show up when we planted peanuts there the last time. It doesn’t have the splits in the stems as of yet. It wasn’t there last week. Last week we spray generic filicide plus generic bravo because I found lots of white mold in the Ga 09. It looks like a spider mite hit from a distance but there are no webs or mites to be found. Boron went out July 10. So it isn’t boron toxicity. Oh my, what can it be? Could it be Zn toxicity that just hasn’t split the stems yet ?

Based on the images you have sent and what I can see on my machine, this looks a lot like mites. The peanuts look really dry in the image with the waterways (the low spot looks much better, the narrow drain) and they may get just as bad as the brown ones. If this is mites it will take probably 2 applications of miticide to stop them fairly well. Sorry I can’t help more from where I am. If it is dry like it appears on my screen, don’t spray any fungicide or mow anything near the field.

But, if you are not seeing webs or the actual mites (can’t tell from the images) it could simply be dry weather. If there are no mites this is probably drought. No correction for that unless you have irrigation.

Sometimes there is not extensive webbing with severe mite outbreaks, but I doubt that would be the case if this were actually a severe mite issue.

HOPEFULLY tonight and tomorrow brings some much needed rain which is the best medicine we can get. Comite is most likely the best initial option for mite control if they do occur. A heavy rain will also do wonders for any worm infestations.

Did we find any active mite populations in the field? I would like to follow up with a peanut note showing that that field was either dry weather or a combination of dry weather and mites.

We looked at it and did not find any spider mites. Very dry weather in area. Other crops were wilting.

Looks like the worst peanuts would be up on the hill rather than the lower spot. But, the lower spot may have developed soil physical characteristics limiting root growth and hence peanuts in that area might show more severe symptoms earlier. That is why I leaned toward mites initially because it was a low spot but near a field border. But presence/absence of the pest points to drought. Mites could have come and gone but unlikely with that much injury. Also could not see anything suggesting a farmer overspray with anything. Initially it looked like a defined area with some straight edges (right angles and straight edges often suggest application error caused by a person) but this appears to be a spot. 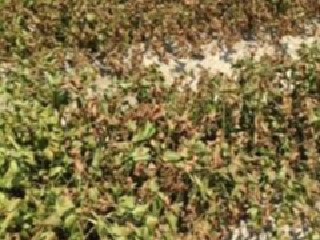 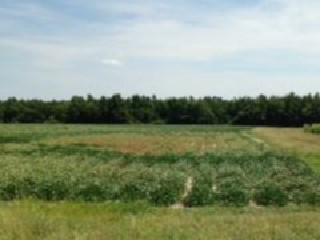 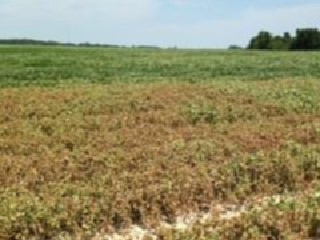