Find this article at:
go.ncsu.edu/readext?397408
— Written By David Jordan

Digging and harvesting conditions were virtually non-existent in V-C region from September 25 until October 9. Rainfall from the systems prior to Joaquin and then rainfall during and after Joaquin caused major flooding in some parts of South Carolina and southeastern North Carolina. While flooding was very limited in central and northeastern North Carolina and Virginia, rainfall often exceeded 5 inches and caused major water-logged soils to be in place. Rainfall during the weekend of October 10 added more complications for digging and harvesting. Approximately 65% of the peanut crop in the region has been dug as of October 15 with about 30% harvested. Weather conditions through the weekend of October 17 should be good for field operations but in some areas soils will continue to need to dry before digging can resume. The upper V-C may experience frost on October 19 and for that reason many growers will curtail digging after October 15 until risk of freeze damage passes. As growers continue digging during the coming weeks pod loss from over-mature pods as a result of delays caused by weather will result in shedding of pods. Peanuts that are now being combined will also suffer from pod loss because of weak vines, especially for peanuts dug prior to the excessive rains. A considerable amount of peanuts will be characterized as segregation 2 or damaged peanuts. However, a final estimate of this loss will not be known until early November.

The estimate for planted hectares is 85,000 (210,000 acres) for the region, however, actual harvested hectares will be lower due to some flooding in the lower V-C. Approximately 5% of the planted crop in the V-C region most likely will not be harvested. The yield estimate is decreased to 3,100 pounds/acre (3,472 kg/ha) due to concerns over delays in digging and pod shed, loss of pods from peanuts dug prior to excessive rain, and less than ideal digging conditions for the next few weeks. Average yields in Virginia will be higher than North Carolina or South Carolina. Yields in North Carolina will exceed yields in South Carolina. Estimates of yields in South Carolina, North Carolina, and Virginia are 2,600, 3,300, and 3,900 pounds per acre, respectively, corresponding to 2,912 kg/ha, 3,360 kg/ha, and 4,368 kg/ha. 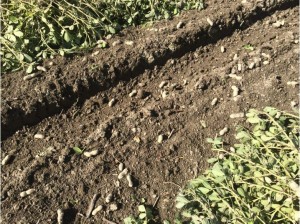 Pod loss following delay in digging past the optimum digging date based on pod mesocarp color. 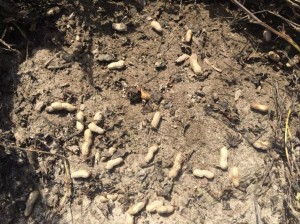 Pod loss after lifting vines immediately prior to combining. 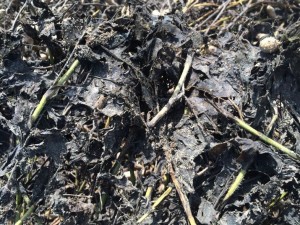 Degrading of vines after peanut remained in the field for 3 weeks under wet and cloudy conditions following digging. 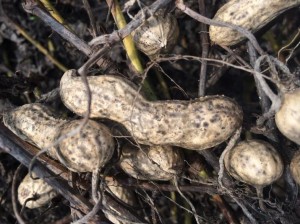 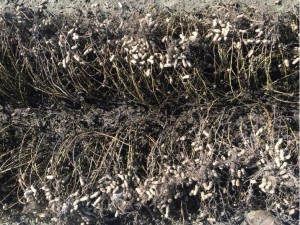 Peanut vines on October 12 when planted May 4 and dug September 21. 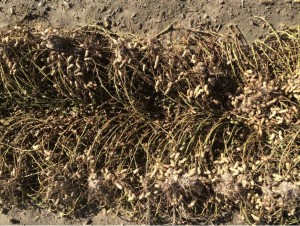 Peanut vines and pods on October 12 when planted May 18 and dug May 28. 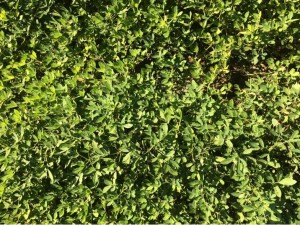 Peanut planted May 28 and not dug as of October 15. 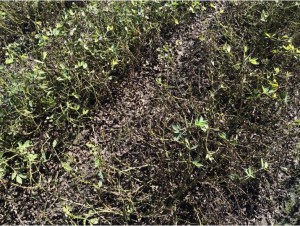 Canopy defoliation caused by late leaf spot in fields where digging was been delayed due to wet soils and late-season fungicide was not applied. 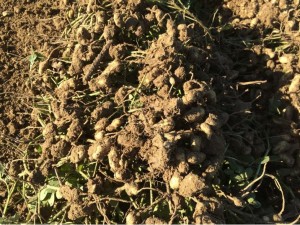 Peanut pods with excess soil due to wet digging conditions. 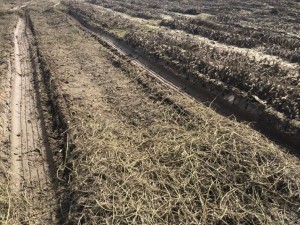