Find this article at:
go.ncsu.edu/readext?530765
— Written By David Jordan

Field conditions during the past three weeks have been marginal for field operations in the Virginia-Carolina Region. Soils dried to some degree during the first few days of June but prior to that, rainfall was excessive. Essentially all peanut that was projected to be planted in South Carolina have been planted. The majority of plantings in South Carolina occurred in early May with the balance completed by June 1. In North Carolina and Virginia, approximately 85% of planting was completed by June 1 with the balance of plantings projected to be completed by June 5. Although peanut can yield well in the Virginia-Carolina region when planted in early June, yield is less predictable because of possible delays in maturation during the growing season caused by biotic and abiotic stresses and the possibility of cool temperatures in late September and early October that can slow pod and kernel development. Some growers with significant cotton and peanut remaining to be planted most likely will shift to soybean if additional rainfall prevents planting by June 5.

Peanut stands are relatively good across the region given the amount of rainfall received during the month of May. Soil temperatures warmed quickly in early May and most night temperatures have been suitable for emergence and good early season growth. However, cloudy days have minimized growth of emerged peanut in some instances saturated fields have had a negative impact on stand establishment. However, the crop in the Virginia-Carolina region continues to have good potential.

Weed management has been difficult because of excessive rain and challenges associated with getting back into field to make herbicide applications. However, the rainfall has activated preemergence herbicides and this will improve weed control. Unfortunately, the length of residual control may be shorter than normal because excess rain has moved herbicides deeper into the soil profile. Flumioxazin is a popular herbicide applied at planting and with excessive rainfall, especially as peanut emerge injury occurred in some fields. In most cases injury will be transient will not impact yield in a negative manner. Injury from thrips is becoming apparent in some fields and many growers most likely will need to apply insecticide to further protect peanut from injury. Excessive rain most likely diluted insecticide in soil, especially in fields where rainfall exceeded 10 cm.

Field in eastern North Carolina near Rocky Mount that was too wet for primary tillage on May 30. 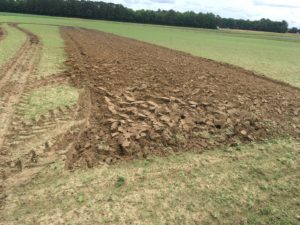 Peanut field ready for planting in eastern North Carolina on May 30. 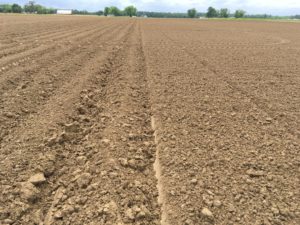 Peanut injured by Valor SX, a popular herbicide that contains flumiozaxin. Peanut was planted on May 8 and image recorded on May 21. 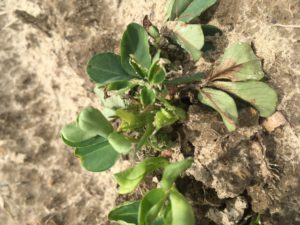 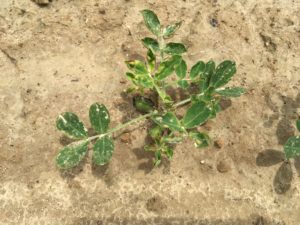 Peanut seedlings experiencing stress from a combination of poor quality and environmental conditions. 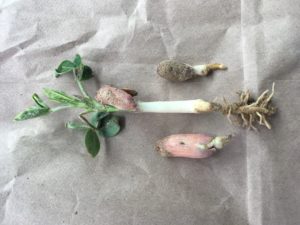